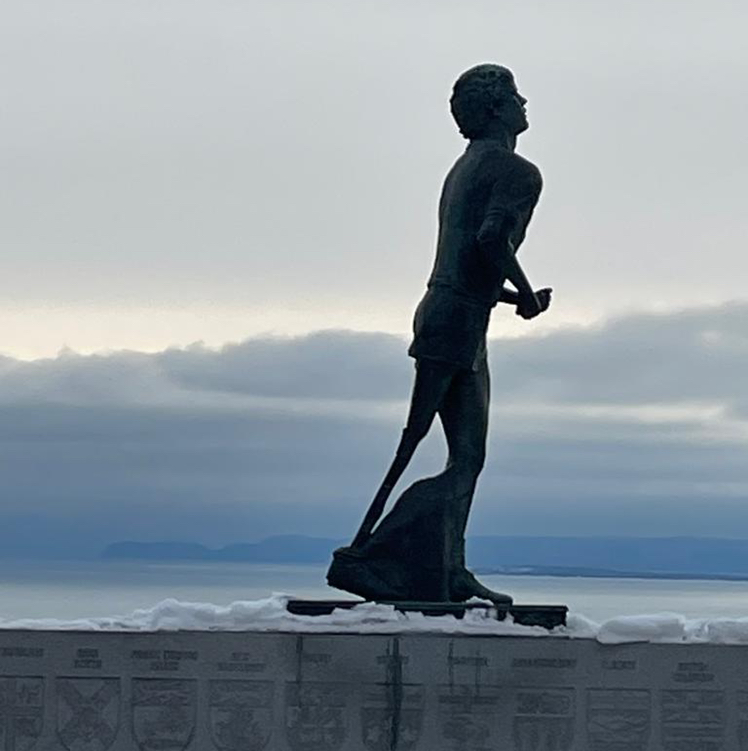 Terry Fox? Ever heard of him? He ran for the children: a marathon a day, every day in his Marathon of Hope…on a prosthetic leg. In 2005 Canada commemorated his legacy with a loonie coin in his honor. Wow! What a man!
“After losing his right leg to cancer at age 18, Terry Fox decided to run across Canada to raise awareness and money for cancer research. With the use of a customized running prothesis, he set out from St. John’s, Newfoundland, on 12 April 1980 and covered 5,373 km in 143 days — an average of 42 km (26 miles) per day. He was forced to stop his Marathon of Hope outside Thunder Bay, Ontario, on 1 September 1980, when cancer had invaded his lungs. He died one month before his 23rd birthday.” bit.ly/3rpveBv

Why does his story inspire me so much? He looked around at other people’s pain and struggles(the year in the pediatric cancer ward) and decided to change the future, trained 14 months and did it. No he did not finish, he did not have to: what he started made what he stood for unstoppable: Hope!
If you have ever been to Canada you will know harsh weather conditions will be meeting you on the road. There will be one million reasons why not to continue. Yet a promise is a promise. 40 years later the Terry Fox run has become part of the Canadian culture still raising awareness and money for Cancer research rippling out to many countries and setting the pace for other athletes to rise to their abilities.

What marathon doe you have to run today? And what excuse(s) have you come up with? And is there a Terry you can find in yourself to decide, overcome, persevere and inspire your world with by just looking around and coin it for the next generation. If you have two legs you have double the opportunity than Terry had to do it…

I am walking 5km today- let’s see where the road takes me. Hope to see you there.

Xxx
Sr. Marthie Nel Hauptfleisch
Singer-Songwriter, Professional Nurse, Inspirational Speaker
“Find Your Purpose And Run With It”
Marthie@MarthieNel.com
083 767 2701
Womanonfire_1 instagram
#MondaysWithMarthie: goo.gl/9vbmfc
>In the picture is one of the statues in Thunder Bay where Terry ran his last mile. Watch more about Terry’s story.
>>40 years later bit.ly/31otA8H
>> The one minute story bit.ly/3lZ7W4e
>> The Marathon of Hope bit.ly/31pzW7x
>>2005 Loonie Coin bit.ly/2PvSYXg
>Footcare as usual. I am away until 1 April.
> Song of the week: ‘Let’s make cancer history’ I wrote this song for a Cansa event where they were celebrating the volunteers who support cancer patients. It was inspired by them and my mother-in-law who was champing her lung cancer on another continent. You often hear the stories of the people who ‘carry the handbags’ while waiting to finish cancer treatments: the volunteers.
3 November 2005

You lead the way to new beginnings,
I see the light today

One voice can change the world around us

One by one –
I volunteer to be strong

Every survivor has a story –
You give me reasons to believe

I make a difference everyday

In every life – I cross along my way

You were there for me,
You walked with me,
You took care of me

You gave your time to me,
Your generosity,
Your financial support

I remember your passion-
Giving tirelessly

To make a success,
To make cancer history

Let’s make, We can …
make Cancer history
One by one –
I volunteer to be strong